Posted by Academy of Gandhian Studies - AGS India at 2:37 AM 3 comments:

Climate change is a global phenomenon. Climate change refers to changes in the composition of the earth‘s atmosphere, which are over and above the natural variability in climate. There is widespread consensus in the scientific community that climate change is caused to a large extent by greenhouse gas emissions cause by human activities. Natural factors play only a secondary role (IPCC 2007).

Because of its anthropogenic drivers the United Nations agreed on the following definition of climate change: “Climate change means a change of climate which is attributed directly or indirectly to human activity that alters the composition of the global atmosphere and which is in addition to natural climate variability observed over comparable time periods.”  [UNFCCC, Article 1 (2.)]

“Global warming is not the only problem now facing mankind, but it is one of the most serious with which humanity has ever been confronted.” (United Nations Environment Programme: Our Planet – Climate Change & Economic Development, 2007). To mitigate climate change human beings all over the world will have to drastically reduce greenhouse gas emissions.
Posted by Academy of Gandhian Studies - AGS India at 2:00 AM 1 comment:

Goal:
The goal of AdaptCap is to reduce the vulnerabilities of coastal communities and cities in Tamil Nadu and Andhra Pradesh, India, to climate change and strengthen capacities of local authorities and the population on climate change adaptation, climate change mitigation and disaster risk reduction.

Objectives:
• Create and implement measures for climate adaptation as well as mitigation and disaster risk reduction in coastal communities, support local authorities in addressing related challenges.
• Develop and carry out pilot initiatives on adaptation and mitigation in rural communities (e.g. by improving local infrastructure).
• Improve capacities and decision making skills of local bodies and communities on adaptation and mitigation and provide advisory services on disaster risk management
Create public awareness, improve regional and global visibility of the project and stimulate networking.
• AdaptCap aims to support Millennium Development Goals 1 and 7 of lasting poverty reduction and to ensure environmental sustainability as well as achievement of the targets under the Indian National Action Plan on Climate Change (NAPCC).
Posted by Academy of Gandhian Studies - AGS India at 1:23 AM No comments:

First Phase
Initially, 3 clusters are targeted (Vishakapatnam, Prakasam and Kavali); these consist of 1 city and 3 villages each. The idea is to also strengthen the urban-rural links within the target clusters. The following are included in the first phase:
1. DISTRICT VISHAKAPATNAM:

This project is financed by the European Commission under the programme Thematic Programme for Environment and Sustainable Management of Natural Resources, including Energy. This programme and the approach of EuropeAid follow the budget line 21 04 01.

GIZ-ASEM is a joint programme of the Ministry of Environment and Forests (MoEF) Government of India and the Deutsche Gesellschaft fuer Internationale Zusammenarbeit (GIZ) GmbH on behalf of the German Federal Ministry for Economic Cooperation and Development (BMZ), focusing on urban and industrial environmental management in India.

During this project, GIZ-ASEM is the lead applicant and responsible for the overall project management, including (but not limited to):

The following organisations have come together with GIZ-ASEM and European Commission for the AdaptCap project:

With the support of GIZ and Plan International, AGS has executed various comprehensive programmes for the Tsunami affected on Disaster management, desalination and desilation of land, renovation of water bodies, coastal plantation, construction of multipurpose centres, establishment of early warning systems, formation of team and committees and capacity building on disaster preparedness, plan preparation and advocacy and lobbying. AGS coordinates the activities of more than 15 partner NGOs along coastal Andhra Pradesh for implementation of various programmes. AGS worked with GIZ on the Asia Pro Eco II B Post Tsunami project in the Nellore, Prakasam, Vishakhapatnam, East and West Godavari regions of Andhra Pradesh.

Posted by Academy of Gandhian Studies - AGS India at 1:17 AM No comments: 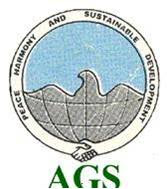 AGS Vision:
Contribution to the promotion of a democratic social order where in all the citizens enjoy a sense of social justice and economic well being without any form of discrimination, striving for sustainable development, social harmony and universal peace.
Our Mission:
Promotion of interaction between Gandhian thinkers and professional groups so as to explore, analyze and adapt the application of Gandhian tenets in resolving the problems of contemporary society, while promoting harmony and sustainable development.
Our Values:
Objectives:
Posted by Academy of Gandhian Studies - AGS India at 12:02 AM No comments:

The key interventions of AGS facilitated & implemented successfully with collective efforts are...

Academy of Gandhian Studies - AGS India
Academy of Gandhian studies (AGS), is a facilitating NGO working for the past thirty three years is committed to end injustice, inequality and poverty through ‘Satya, Ahimsa and Dharma’. It is well-established center for Training, Research and Social Action. The key areas of intervention during the last three decades include peace initiatives, programmes for gender equity in six states, environmental awareness campaigns and networking at district levels in three states, youth for development and in the recent past has more focused on HIV/AIDS, Trafficking in women and children, Disaster management and response and natural resource management. The Academy currently provides the needed leadership to a network of 20 organizations spread across ten districts and working against the contemporary issues in Andhra Pradesh, India.